Skip to content
How does a plasma nitriding plant work? 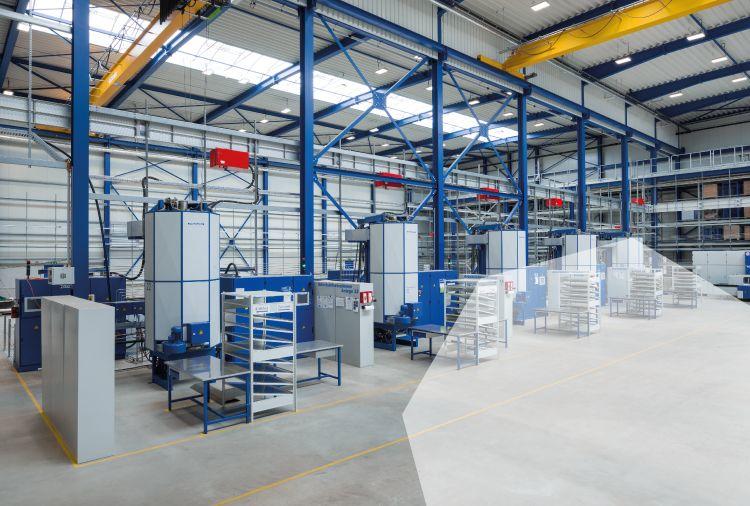 How does a plasma nitriding plant work?

How does a plasma nitriding plant work?

During plasma nitriding, a plasma is generated between the components and the vessel wall. This plasma ensures that chemical processes which normally only take place at high temperatures take place at low temperatures (420–580°C), too. It activates the component surface and ensures that nitrogen molecules are transported to the surface and are able to diffuse there – wholly without any harmful chemical input substances, in a manner which is environmentally friendly and safe.

Expert knowledge on the subject

Plasma refers to an electrically conductive gas. For a gas to be conductive, free charge carriers must be available for transporting the current. At pressures > 0.1 bar, this condition is only satisfied at temperatures greater than approx. 8,000 K. If the pressure is reduced to approx. 1 mbar, a plasma can be generated even at far lower temperatures. This effect is exploited during plasma heat treatment. The low-pressure plasma enables "high-temperature surface chemistry at low component temperatures", opening up unique process techniques for many industries. To generate plasma, a voltage of several hundred volts is applied in a vacuum between a component (cathode) and the vessel wall (anode). Depending on the conductivity of the gases used, a certain current density results when the voltage is applied. The relationship between the voltage and current density of a glow discharge is presented schematically in Figure 5-1. 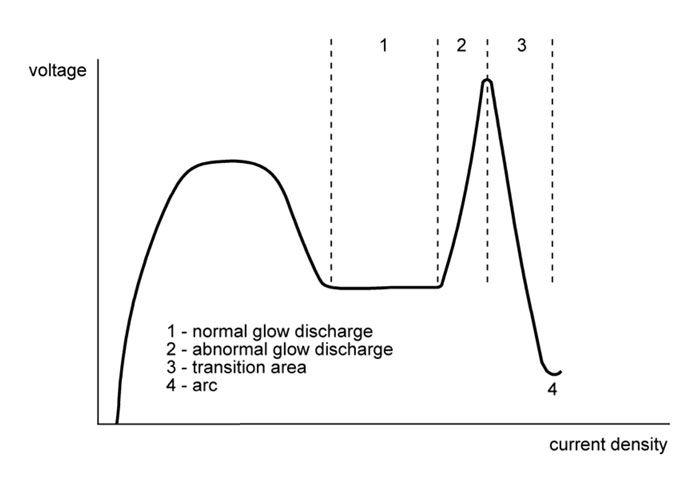 The work area used for the plasma nitriding and nitrocarburising is one of abnormal discharge.
Nitriding in plasma was performed even before the Second World War. Afterwards, at the end of the fifties, there was a new impetus for the industrial use of the process with the foundation of the Institute of the Society for the Promotion of Glow discharge Research (Institut der Gesellschaft zur Förderung der Glimmentladungsforschung). These developments are closely associated with the name Berghaus.
The state of the technology at the start of the 80s at the end of the 20th Century involved water-cooled systems [1] in which the discharge was provided by means of a DC voltage (cold-wall technology). Key disadvantages to this process technique are large temperature differences in a batch and, as a result, large variations in the treatment result, as well as a relatively low load density, high energy consumption and the tight interlinking of thermal and chemical processes. Considerable progress was able to be made through the use of a pulsed discharge. [2, 3] Pulsing (see Figure 5-2) reduces the energy input in the plant and the temperature uniformity in the batch is improved. Today, all industrial systems are equipped with this pulsing technology. Typical values for the pulse duration are 50 to 100 µsec and 100 to 300 µsec for the pulse repetition time. 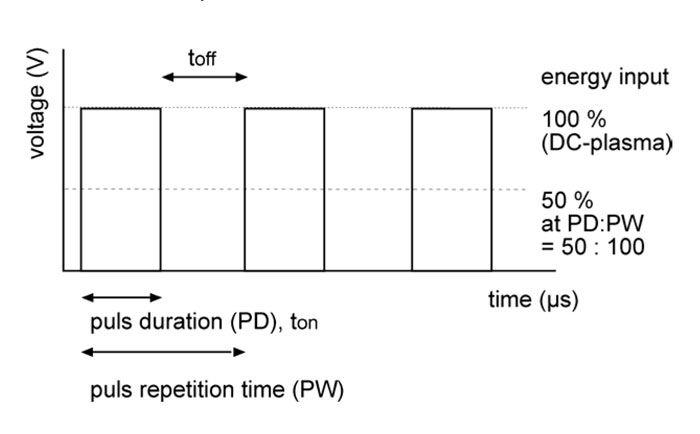 Process parameters for plasma nitriding and nitrocarburising and their effects

The mechanism of substance transition from plasma to solid is described inconsistently in the literature. The most frequently cited model from Kölbel [1] is not appropriate for technical plasma nitriding processes. Due to the appearance of iron nitride on non-conductive ceramics near to the workpieces (cathode), it is postulated that iron is separated (sputtered) from the surface to be treated due to ion bombardment and combines with iron nitride in a gas phase reaction, which in turn precipitates on the surface.
Studies from Hudis [4] have shown, however, that this process plays a subordinate role under standard working conditions of plasma nitriding. Today, it is assumed that the atomic nitrogen generated directly on the surface is critical to the plasma nitriding process. An overview and evaluation of the various ideas are contained in the work of Lampe [5]. Models for controlling the compound layer structure using a nitriding potential, as they exist for gas nitriding, do not exist for plasma nitriding. What is key is working in the plasma with a nitrogen/hydrogen atmosphere. There is no catalytic disintegration of the donor medium as there is with gas nitriding. Molecular nitrogen is transformed in the glow boundary directly into "reactive nitrogen". This simplifies understanding how the nitrogen activity is influenced in the plasma. It is controlled by the composition of the gas phase (ratio of nitrogen to hydrogen). High nitrogen partial pressures are comparable to the effect of a high nitriding potential for gas nitriding. In the case of nitriding without a compound layer, a considerable excess of hydrogen is used. These relationships are presented in Figure 5-4. 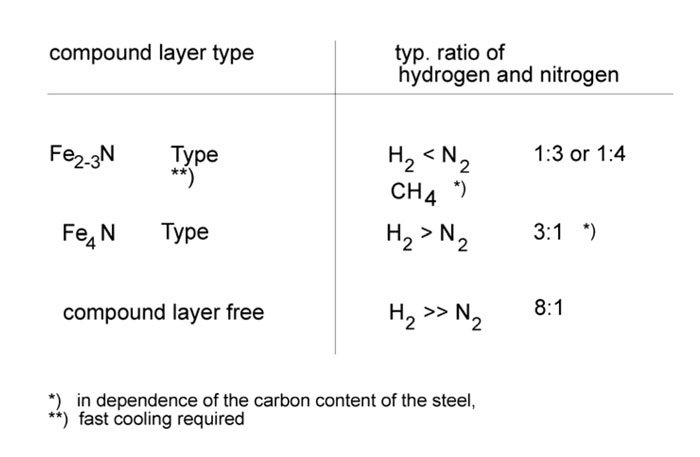 Nitrocarburising is performed by adding low quantities of carbonic gases (approx. 1–5% methane or carbon dioxide). Helpful for determining gas compositions for plasma nitriding and nitrocarburising are thermodynamic phase diagrams, since the processes in solids are not "plasma-specific".
During the plasma heat treatment, one must also bear in mind that the influence on nitrogen and carbon activity as well as an influence on the temperature distribution in the batch are considered when choosing plasma parameters. The temperature distribution in the batch has an impact on the variations of the nitriding layer thicknesses and on the dimensional and form change behaviour of the components. When maintaining the nitriding temperature, there is a thermal equilibrium between the supplied energy and that dissipated through the furnace wall. Since heat transfer during plasma nitriding is predominantly through radiation, temperature differences are required based on the type of loading and the load density to transport the energy introduced by the plasma out of the furnace. The evaluation of furnaces based on their temperature uniformity made in DIN 17052-1 is not applicable to plasma nitriding systems. Temperature differences can be optimised through the load density, loading and the selection of suitable process parameters.

Explanations regarding the individual influencing factors:

To ignite the plasma, a so-called ignition voltage is necessary. This depends on the distance between the cathode and anode, the gases used and the pressure. (See Figure 5-5.) This results in a minimum operating voltage.
The pulsed voltage can be reduced by an ignition pulse (see Figure 5-6). It is possible to ignite a plasma stably with the ignition pulse even in unfavourable conditions
(high pressure, large distance between cathode and anode). The voltage can be significantly reduced again immediately after plasma ignition by the ignition pulse. Due to the very brief application time, the ignition voltage is not included in the energy balance.
This results in two key advantages with the ignition pulse and the low pulse voltage associated with it. 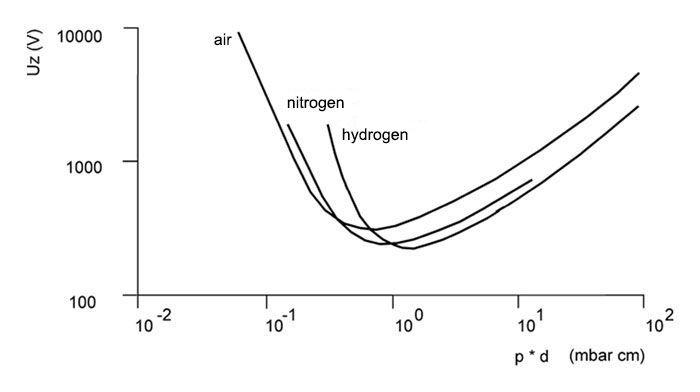 Figure 5-5: ignition voltages (Uz) for plasma ignition for different gases based on the pressure (p) and the distance between anode and cathode (d) 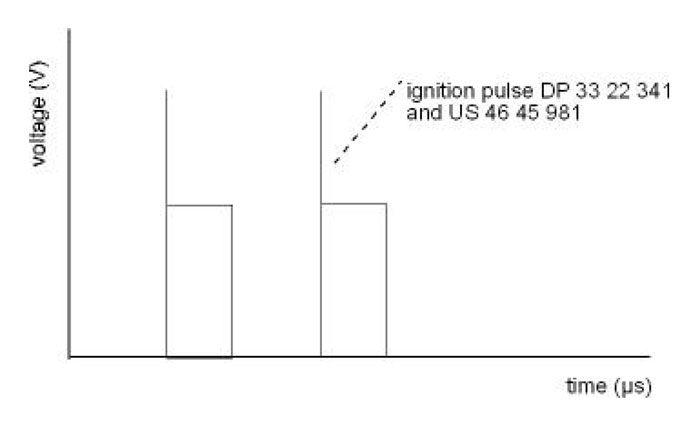 The current density during a pulse is determined by the operating voltage and the conductivity of the gas mixture used (pressure, partial pressures of the gases). The average current density that becomes effective for the energy balance can be reduced through the duty cycle (DC): DC = Don/(Don + Doff). The effect of the individual process values on the current density is summarised schematically in Figure 5-7.

Figure 5-7: effect of individual process values on the current density

Area of the heat treatment object and the loading rack.

Characterises the heat quantity that can be irradiated through the furnace wall. The factor depends on the temperature.

The irradiating area is determined by the area of the batch exchanging radiation with the furnace wall.

In order to treat as many parts in a batch as possible, how the process parameters are to be selected can easily be inferred from the equations (1) and (2).
Minimal pulse voltages, current densities and pressures are essential in this context.
For the parameter selection, it should be noted that the glow boundary thickness is determined by the density of the gas. The glow boundary thickness determines whether the plasma "enters" a gap or a hole or not. The pressure process parameter influences the glow boundary thickness and is therefore to be chosen as a matter of priority based on the component geometry. This relationship is presented in Figure 5-8.
By adding argon, the glow boundary can be reduced.
An altogether highly complex system of interactions therefore exists. The plant manufacturers take account of this whereby ready "cooking recipes" are supplied for very specific tasks.
Since reproducibility in plasma is very good, the right sets of parameters have been quickly developed for new problems, and these can be used continually without any changes. 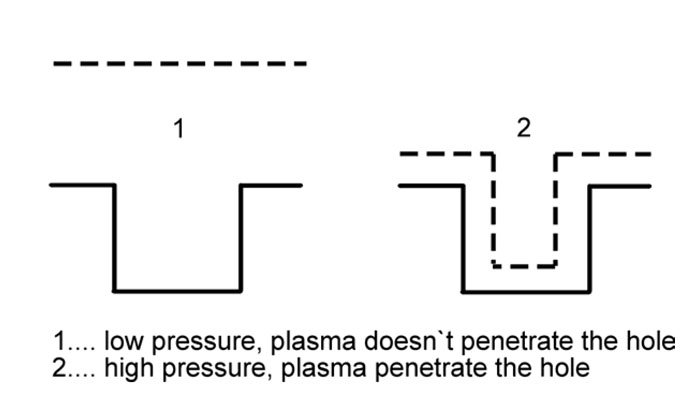 Figure 5-8: influence of pressure on the glow boundary thickness

The nitriding materials must be loaded into the plant clean, dry and free of passivating residues. The entire process is broken down into the following steps:
Heating
Surface activation in the plasma (sputtering)
Heating to treatment temperature
Nitriding/nitrocarburising
Cooling

Figure 5-9: plant states over the time sequence of a batch

Below are details of the individual substeps:
Step 1 – heating

After the plant is closed, a vacuum is generated and the components are heated by the wall heating. The evacuation time to final pressure (e.g. 1 Pa) is around 10–15 minutes. For workpieces with a small surface/volume ratio, heating by convection in an inert gas atmosphere is expedient.

The surface of the component is activated in a hydrogen plasma through a "particle bombardment" Passivated layers are removed so that high- chrome-content steels can also be nitrided. However, sputtering is no substitute for cleaning coarse production residues off the parts. The sputtering effect can be improved by adding argon.

By using the plasma energy and the wall heating, the components are heated up to nitriding temperature.

The treatment temperature and duration are determined by the task to be completed (type of compound layer, layer thicknesses, properties, etc.). Selecting the process parameters is part of setting the aims of the process.

Once the prescribed holding time is reached, the wall heating is switched off. The batch is cooled by means of external fans. The use of rapid cooling equipment (gas/water heat exchangers) is also possible. In special cases, cooling in the plasma is useful.

4. Specific advantages and disadvantages of treatment in plasma

Benefits:
- Partial treatments open up considerable opportunities to the engineer for
composite structures
- Very good optimisation opportunities of the layer structure in terms of
stress. (E.g. thin compound layers with large nitriding hardness depths.)
- Very good reproducibility and narrow tolerances in the treatment result
- Low consumption of media
- Environmentally friendly
- No restrictions in terms of the ability to treat nitridable materials
- Less roughness compared to treatment in a salt bath and gas
- Compact, dense compound layers
- Very good integration (a plasma plant can be placed directly in the production
line.)
- Process combinations in one plant; e.g. nitriding and coating or
nitriding and oxidation
- The best dimensional stability and form retention can be expected for sintered parts following treatment
in plasma. In addition, with plasma nitriding,
residues of calibration equipment can be safely removed
during the heating phase. / 10 /

Disadvantages:
- With just a few exceptions, plasma processes require defined loading
of the parts to be treated because the plasma does not enter gaps smaller than 0.6–0.8 mm.